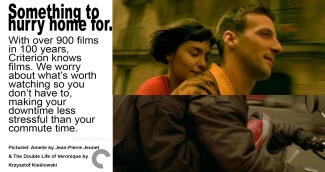 Commissioned by a school project and inspired by my love of film and The Criterion Collection, I created these simple ads for the company if there were ever an active campaign. Including a bike inspired billboard, a fashion related magazine ad, and a poster on ambiguous endings I tried to make the films the pinnacle of the ads instead of what was being said, providing different genres and themes to pique the average person’s interest. I also kept a simplistic theme seen on the Criterion website as well as the logo. Though some of the films used are not in the collection, I found similarities I knew or found and worked around those, though if I was to redo it I would specifically use the works at hand. Adding the movie title provides vital information I think is necessary, while I don’ think the Criterion logo needs any words as it is mentioned in the blurbs. Of course this is all in good fun and I do not own the rights to any of the movies nor the logo. I also included my beginning idea which spurred the project, which was Moonlight juxtaposed against In The Mood For Love.